Find out about fundraising events, the latest news and social media buzz here

Listen to The First Dodcast!

Away Days And Back

A Day For Doddie!

Diageo Rolls Out The Barrel For Foundation

A group of friends are cycling from Buckingham Palace to Pisa to support the...

Doddie and the trustees of My Name'5 Doddie Foundation welcome the launch of MND-SMART,...

Garry Cuthbert and his friend Steve Mason are holding a Driving Range Challenge on July...

A fantastic day was had by everyone on the 2nd of January at Morris Equestrian Centre for...

The Choat family have set themselves a mountainous task to honour their parents' love of...

Listen to The First Dodcast!

Simon Halliday and the Sporting Wine Club have extended their support for My Name'5...

Rob Wainwright and some fellow cycling dafties plan a 500 mile cycle in 48hrs from...

We were delighted to see Doddie receive the Helen Rollason Award at this year's BBC...

My Name'5 Doddie Foundation
@Munros4MND @pressjournal Great to read more about your challenge, keep us posted!
2 days, 18 hours ago

My Name'5 Doddie Foundation
All power to the Choat family, a tremendous way to support us and their Dad. https://t.co/AalhK5dJuv
4 days, 10 hours ago

My Name'5 Doddie Foundation
Well this sounds like fun! https://t.co/H98RjyNqOR
5 days, 11 hours ago

My Name'5 Doddie Foundation
Fantastic effort from the @broaratlantic brothers, inspiring stuff, now get behind @madgirafferow as he battles the… https://t.co/nAqrmMrd3D
6 days, 10 hours ago

My Name'5 Doddie Foundation
We welcome this wholeheartedly and are thankful to all our supporters who have enabled us to commit significant fun… https://t.co/aLlL5yMkEa
1 week, 2 days ago

My Name'5 Doddie Foundation
Merry Christmas everyone ... https://t.co/gsJwndxLJN
1 month ago

My Name'5 Doddie Foundation
Introducing the first Dodcast! A series of podcasts with Doddie and friends talking rugby, life and living with MND… https://t.co/2tOjLAMoD7
1 month ago

My Name'5 Doddie Foundation
Cannot begin to express my feelings about this effort! May the wind be with you John! Good luck x what an awesome e… https://t.co/E2jEm2jG2Z
1 month, 1 week ago

My Name'5 Doddie Foundation
Free Doddie handband....yes please! Raging Bull are giving away a Doddie headband for every Midlayer sold during in… https://t.co/SnIg7vq2J9
1 month, 2 weeks ago

My Name'5 Doddie Foundation
many moved by #DoddieWeir '#OneMoreTry' @BBCScotland andhis positive attitude towards battling #MND. If you want in… https://t.co/A5H0AQsUQv
1 month, 2 weeks ago

Away Days And Back

My Names Doddie away days and back

Event description: A cycle event from Murrayfield to each of the opposing teams stadiums and back using the gym bikes here at HMP Glenochil, this will involve staff and prisoners - 11,423 miles!! 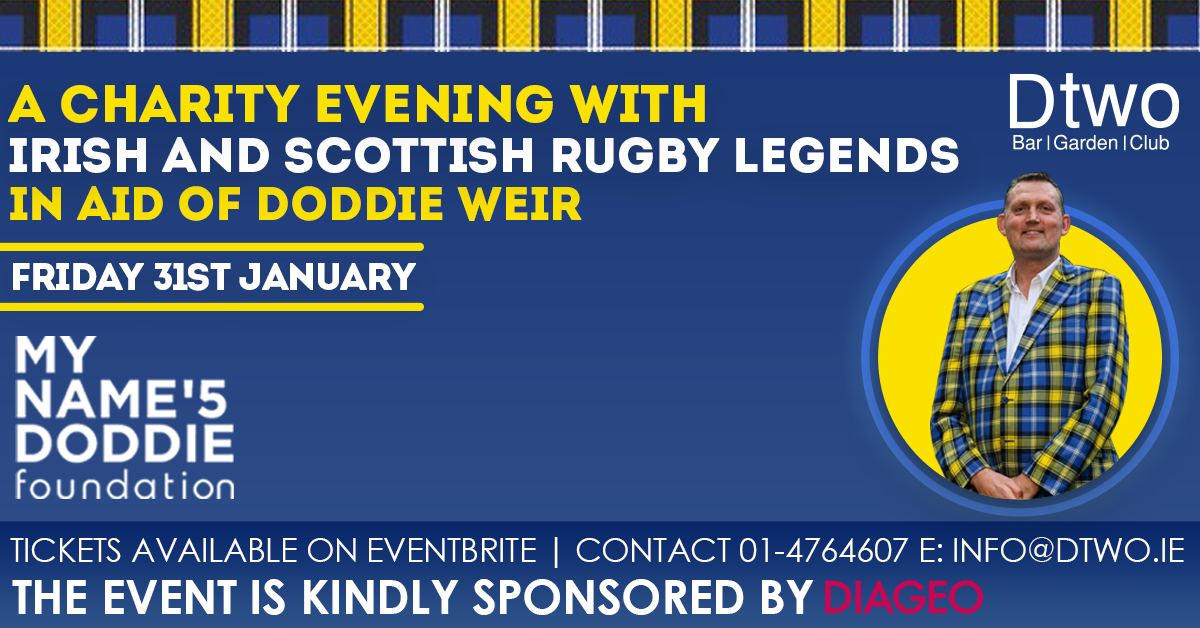 An evening with Irish and Scottish Rugby Legends to raise funds for My Name'5 Doddie Foundation. 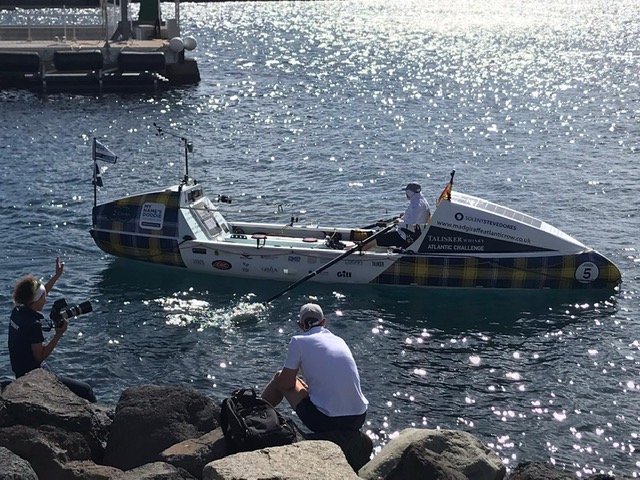 John is rowing 3,000 miles across the Atlantic as part of the Talisker Whisky Atlantic Challenge 2019 to raise funds and awareness for the My Name 5 Doddie Foundation.

A small group of friends are going to ride, row, walk and run as many miles as possible in 2020 to raise at least £5000 for MND research.

A small group of friends are going to ride, row, walk and run as many miles as possible in 2020 to raise at least £5000 for MND research. 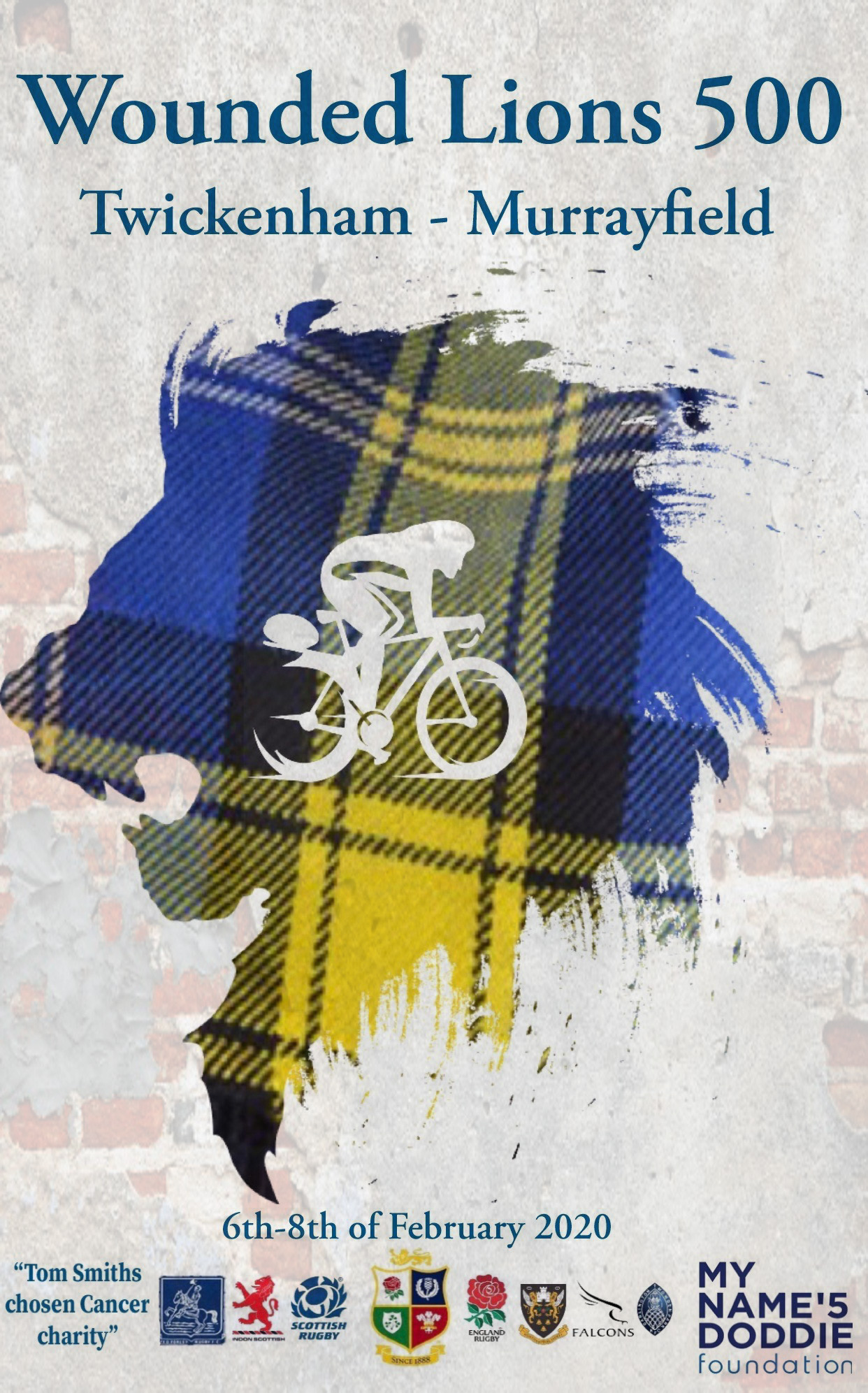 Rob Wainwright and some fellow cycling dafties plan a 500 mile cycle in 48hrs from Twickenham to Murrayfield with a match ball for the Calcutta Cup game on the 8th of February in support of 2 wounded Lions mates of Rob's from the '97 tour of South Africa, Tom Smith and Doddie Weir.

The departure will be from Twickenham around lunchtime on the 6/2/20, the route north plans to have stops at some notable clubs, hopefully including London Scottish, Northampton Saints, Darlington Mowden Park RFC, Newcastle Falcons and Jedforest before the final push to Murrayfield.
A peloton of 6 cyclists and a support crew of 6 will be moving day and night to get to Murrayfield in plenty of time for the big match kickoff. It is likely there will be some familiar faces joining along the way and hoped many will turn out to support and ride sections with the team as we pass your patch.
The aim is to beat the £65k we raised last year for MN5DF. 100% of all funds raised will go to the charities, and this year we will be splitting our fundraising between Doddie's MN5DF and Tom Smith's chosen charitable foundation, "40tude".
40tude is an innovative charity that raises funds for pioneering research projects targeted at the early diagnosis and treatment of colon cancer at St Mark’s, the UK's national bowel hospital. 40tude also promotes awareness of the importance of being screened early for colon cancer.

St Mark's Hospital in Harrow was founded in 1835 as the world’s first specialist bowel disease hospital. It has an extensive research and education programme in the diagnosis and treatment of Inflammatory Bowel Disease and Colon Cancer.

https://uk.virginmoneygiving.com/WoundedLions500
If you are interested in sponoring this amazing challenge, please contact Jill at the Foundation, jill@myname5doddie.co.uk

On 18th February 2020 Gary and Lorraine will attempt over two weeks to ride from Bangkok through Thailand and Cambodia eventually arriving in Vietnam. Gary & Lorraine are massive fans of rugby and indeed Gary played against the great Doddie too many years ago for Biggar RFC. Touched by Doddie's plight. they have decided to try and raise as much as they can for his charity. Being owners of the Crown Inn in Biggar they also have dedicated 2020 as the year the chosen charity of the pub will be Doddie's so more to come.

An Evening For Doddie Weir

Join special guests and friends of My Name'5 Doddie Foundation the night before the Doddie Weir Cup, Wales v Scotland - the final game of the 2020 Six Nations.

A Day For Doddie!

A Day for Doddie will be a busy day! We are having 12 hours of continuous touch rugby followed by a sports auction at night. There will also be a number of other events going on throughout the day involving the local businesses, organisations and schools.

The Great Rugby Cycle 2020 will cover over 1000 miles in an anti-clockwise direction around Ireland in eleven days, taking in some of the finest scenery Ireland has to offer. The peloton will be joined along the route by rugby legends, sporting stars and celebrities from TV and Film to raise awareness and funds for the My Name’5 Doddie Foundation.

Participants can cover these costs via sponsorship either by setting up their own Just Giving page or getting donations from friends or colleagues.

In addition, the Foundation would like the cycle to raise as much money as possible for My Name’5 Doddie and a group Just Giving page will be available for this event.

Sizes for the apparel and any dietary requirements by the 1st March 2020. For any questions are further details please contact:

I am not on Facebook or LinkedIn, please donate any monies or why not join me on Sunday 5 April 2020 and help and support Doddie Weir foundation for a brilliant cause.

Gregor Emslie and his wife are walking from their home near Weston-super-Mare to Ashton Gate, Bristol (approx 20 miles) to watch Bristol Bears v Exeter.
Support them via their fundraising page:
https://www.justgiving.com/fundraising/gregor-emslie1?utm_campaign=pfp-share&utm_content=Gregor-Emslie1&utm_medium=fundraisingpage&utm_source=Facebook&utm_term=G8AD6YVAR

Charity Fundraiser Dinner Dance for MND at Pavilions in Harrogate.

Ceres Events’ 8th Annual Charity Raceday Luncheon will be in aid of the Matt Hampson Foundation, The Cure Parkinson’s Trust and My Name’5 Doddie Foundation. It will be held at Cheltenham Racecourse on Wednesday 15th April, 2020 in our own private marquee overlooking the Parade Ring.

The Matt Hampson Foundation, The Cure Parkinson’s Trust and My Name’5 Doddie Foundation in conjunction with Ceres Events, would like to offer you the chance to come and join us for what promises to be a fabulous day’s racing at the home of The Festival™. This is the perfect opportunity for you to entertain clients, colleagues, friends or family all in aid of three fantastic causes.

For further information and to book or take an advert in our brochure, please contact:

Ô A day’s racing, with all passes and parking

Ô An A4 advert for your business in the luncheon brochure

Ô A racing celebrity speaker to help you ‘Mark your Card’

The main race of the day will be:

We will be doing the three peaks on the 30th May. We will be starting with Ben Nevis, Scafell Pike then Snowdon. We are going to attempt it in 24 hours.

The team that will be doing it are:
Simon Willet
Callum Radcliffe
Sam Batty
Thomas O’Donnell
Michael Philpott
Jon Stannard
Natalie Dean (Natalie will be driving us)

We will be climbing the National Three Peaks in order to raise money for MND Research and My Name'5 Doddie Foundation.

Add your event to our calendar

Send us your event details and we'll add it to our calendar!