Friends, supporters and partners of My Name'5 Doddie Foundation gathered at the Prestonfield House Hotel in Edinburgh to celebrate the charity's 4th anniversary.

Doddie was joined by his family at the gala dinner, hosted by rugby legend Andy Nicol. The evening celebrated the many achievements of the Foundation since it was launched in November 2017 and honoured a number of key supporters who have played a role in that success. The evening was also a chance to look to the future and share the charity's ambition and vision. Five groups who had all gone the "extra mile" to raise vital funds were recognised as well as five Doddie Champions, details below. Scotland head coach Gregor Townsend popped in to give his thoughts on the Autumn Series and he was one of a host of well known rugby faces in the room. The evening was a huge success with significant funds raised for targeted research into MND and to help people living with the disease. It was rounded off with a performance from The Red Hot Chilli Pipers! The dinner also gave our new Doddie Champion, Rob Wainwright, a chance to launch Doddie AID 2022."

A committed group of cyclists set out on an odyssey across the North Coast 500 in the summer. Davy Zyw was diagnosed with MND in 2018. In August, Davy, along with his twin brother, Tommy, and a group of friends rode around the most remote and beautiful corners of Scotland in just 4 days. The ride with Gift Aid raised over £150,000 and Davy won ‘Fundraiser of the Year’ with Cycling Weekly Magazine. He represents the Doddie Ride supporters and the many people who have hopped on their bikes to support us.

This second group was from the North East of Scotland – an area which has been enormously generous over the last four years. The enthusiasm and energy shown by the Stonehaven and wider Aberdeen community through their fundraising campaign “Strive” has been amazing. A group of cyclists pedalled approximately 700 miles around Scotland in 2018 and also hosted a rugby tournament and charity ball, raising over £85,000. The driving force behind Strive, Willie Tulloch, received the award on behalf of the community.

Coast to Coast in 24 Hours

Cycling, running, kayaking & walking, this was sponsored by NFU Mutual and the challenge was undertaken by 8 friends to raise money for MNDF in June 2021.

Jamie Murray was joined by, Scott Wight, Allan Dodds, Barbara Shiel, Steven Shiel, Mathew Wilkie, Wayne Mitchell and Rory Murray and supported by a mighty team of volunteers.   They raised in excess of £40,000, reaching a wide audience across their social media streams.

This group completed their 959-mile John O’Groats to Lands End challenge over 9 days in July 2021. Raising over £50k for the MNDF and our friends at the  Matt Hampson Foundation.

They are a group of current and ex-players at Bridgnorth RFC and decided to create a platform to continue to work as a team after their rugby days were over, and are already planning further events. Dan Griffiths received the award on behalf of the group.

This family created their own special campaign after their father, David, was diagnosed with MND and was unable to fulfil his ambition to bag every Munro (there’s 282!) David and his wife Judy were 15 short of their target when the kids stepped in and decided, along with Judy, to complete the list! And Munros 4 MND was born. Matt, Becky, Paul and Adam have raised almost £40,000 and bagged their last Munro in September.

The Foundation receives enormous support from all quarters and through the storytelling of our friends in the media, we have been able to raise awareness of MND and connect with the wider MND community while keeping up the pressure on government. Doddie, Rob Burrow and Stephen Darby have been given the chance to share their personal stories through their relationship with the BBC Breakfast team and their presenter Sally Nugent.

Old and new friends of Doddie and the Foundation have gone the extra mile in the last four years and none more so than Stuart Thom, former Melrose teammate and now CEO of the Royal Belfast Golf Club. His Great Rugby Cycle events have generated significant funds, inspired so many and covered dare we say thousands of miles with former players and friends. We are already looking forward to his Great Rugby Try scheduled for later this year.

The Foundation’s reach extends far beyond these shores and our friends in Hong Kong have given extraordinary support – the understated “Greatest Rugby Dinner Ever” is a highlight and we’ll talk about a special portrait connected with that dinner later. The driving force behind this Hong Kong connection is our great friend and supporter Martin Murray – Martin couldn't attend but his parents, Malcolm and Muriel, accepted the award on his behalf and on behalf of the wider Hong Kong community.

The rugby family has been at the forefront of the support for the Foundation and one man has defined the term Doddie Champion over the last four years. He has marched, cycled, cajoled, inspired and trekked to support us, cycling to deliver match balls to either end of the country, taken over central Rome with an army of headband wearing rugby fans and invented the Doddie Gump which has morphed into Doddie AID which earlier this year raised in excess of £1million for the Foundation and MND research.

Thank you to A View From My Camera for the lovely photos.

Doddie's Dream a Hit at the Scottish Trad Music Awards 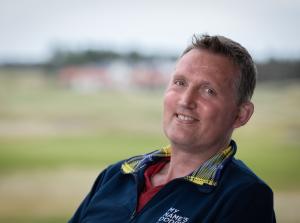