Maximuscle teams up with My Name’5 Doddie Foundation

Maximuscle teams up with Doddie Weir’s, My Name’5 Doddie Foundation to create a limited-edition fundraising Protein Porridge, Max Oats, to be sold at Maximuscle.com

Maximuscle is launching a brand-new Protein Porridge – Max Oats, in partnership with the My Name’5 Doddie Foundation. For over 25 years, Maximuscle has been part of the rugby community, supporting rugby players and fans with the nutritional support they need and champions England players Anthony Watson, Kyle Sinckler and Joe Cokanasigna as brand ambassadors.

Doddie Weir is one of rugby’s most recognisable personalities. He earned 61 caps for Scotland during a successful playing career and represented the British & Irish Lions on their successful tour to South Africa in 1997. A talented, committed, and athletic lock forward, Doddie is now facing his biggest challenge. In June 2017, the Scot revealed he was suffering from Motor Neuron Disease. Doddie has been driven to help fellow sufferers from the outset and seek ways to further research this as yet incurable disease.

Maximuscle will encourage rugby fans to stock up on a healthy breakfast choice whilst helping to raise valuable funds for My Name’5 Doddie Foundation in the process. The 700g pouch offers 10 high protein servings for £10 (RRP) and is available to buy at Maximuscle.com, with Maximuscle donating £5 to the MND Foundation for every pack sold.

Speaking of the partnership, Maximuscle ambassador Anthony Watson said, “It’s great to see Maximuscle supporting the valuable work that My Name’5 Doddie Foundation is doing in the fight against Motor Neuron Disease, helping to raise money and more importantly, awareness for such a worthwhile cause.”

Dan Wood, Maximuscle’s MD said: “We’re delighted to partner with My Name’5 Doddie Foundation, a charity that funds valuable research into MND and supports those with the disease. We hope that Maximuscle fans will love our protein porridge and help our efforts to fundraise for such a good cause.”

My Name’5 Doddie Foundation Chairman, Scott Hastings and a former playing colleague of Doddie added, "We are delighted to have the support of Maximuscle and would like to thank everyone involved in making this partnership happen. Their involvement adds strength to our Foundation which helps us to raise funds and tackle MND through investing in targeted research and helping people living with motor neuron disease”

Edinburgh City 7's to kick off fundraising for the Foundation 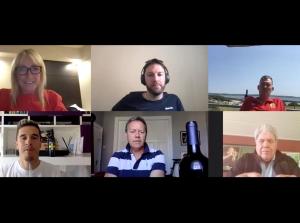