Home / What’s On / Tractor Rally Pulling for the Foundation

A charity tractor run in the Northumberland hills has raised approximately £10,000 for My Name’5 Doddie Foundation.

Conceived between Covid lockdowns in 2020, plans for a charity tractor run in the Northumberland hills were mothballed due to the ongoing pandemic – but the event has finally taken place, with tremendous support.

Close to one hundred tractors took to the roads of the Rede and Coquet valleys, raising funds for three worthy charities – My Name’5 Doddie, The Great North Air Ambulance Appeal and The British Lung Foundation. Organisers are confident that, having raised over £30,000, after costs each charity should benefit by at least £10,000 each.

Chair of the organising committee Malcolm Corbett, of Dykehead Farm, Rochester, kicked off the fundraising by selling a Limousin heifer in the store cattle sale at Hexham Auction Mart the day before the run, fetching the handsome figure of £2050 to John and Willie Dodd, of Saugh House, Belsay.

Then on the morning of Saturday May 28, tractors assembled from all over the North of England and Scottish Borders in the village of Otterburn for breakfast kindly provided by The Upper Redesdale Show Committee before the run was officially started by Doddie Weir himself who was touched to see so many supporting his own and other charities.

The 40-mile road run attracted a great deal of funding, with over one hundred sponsors, contributors and volunteers donating funds, goods and services towards the effort, which included a grand prize raffle and a promise auction. All drivers were presented with a special edition bottle of ‘Road Run Ale’ brewed for the event by the good folk at The F&L Brewery, as well as a glossy souvenir programme as a memento of the day.

An auction was held during the lunch break, which was hosted by Gareth and Jane Latcham at The Rose & Thistle Inn, Alwinton, when all the tractors parked up and the drivers and stewards were able to enjoy a tasty barbecue.

Words from The Scottish Farmer 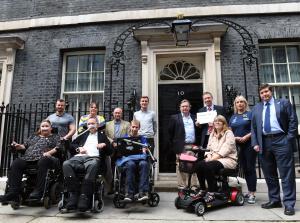 Doddie Reflects on the Scientific Advisory Board Meeting